skip to main | skip to sidebar

Hey yall. It's been a whirlwind of a week. Monday evening we ran errands, Tuesday evening we had football practice and a Cub Scout meeting, and tonight we had church. I'm worn out and the week's not over! I do have a card to post, but it's very simple. Some friends at church celebrated their 20th wedding anniversary today so I stayed up last night to make them an anniversary card. I also made a card for Jan at church since today was her birthday, but it was not a pretty sight. I was tired by the time I got to that one last night, but it's the thought that counts. 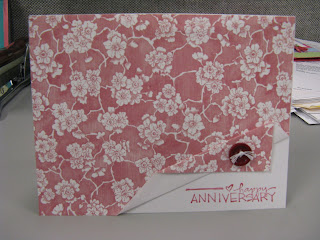 OK. One kid out the tub, the next one in. Jason's still at church. I'm guessing he's in a meeting. Oops, oldest kid not in tub yet and little one whining for me to sit on the couch. Gotta go. I've got another card I'll post tomorrow.
Posted by PaperAddictJenn at 8:34 PM

simple but cute with folded paper and button- thought that counts!

I like the folded corner it looks pretty spiffy!

its elegant yet simple, i like the folded down technique i have used it a couple of times on cards.. HUgs Leona x

This is very pretty!

Hello Jenn, I popped into your blog before, but you didnt add me too your sisterhood group names, hello from UK. I love your blog. 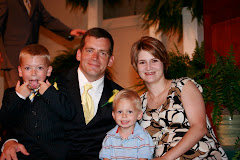